"TBI wasn't the end of my life, but a new beginning." 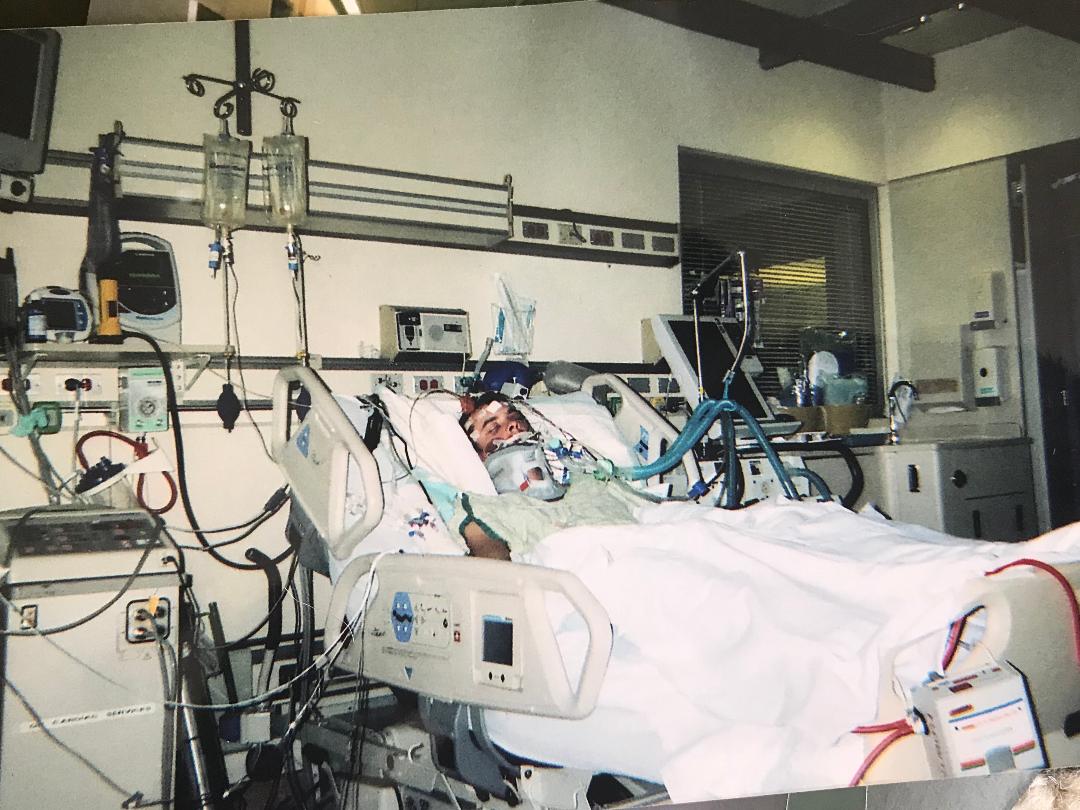 On November 16th, 2010, I went to work just like any other day. I was a third-generation ironworker in Chicago. I was at work for less than an hour when the floor (metal deck) collapsed beneath me and I fell nearly 30 feet to concrete below. I was wearing a hard hat, which is standard, and my partner on that job happened to be a former Marine Corps medic. As a medic, he knew exactly how to respond in such a critical situation. Once paramedics arrived, I was rushed to the nearest hospital-- world-renowned Northwestern Memorial Hospital. I was diagnosed with traumatic brain injury (TBI), specifically a diffuse axonal injury (DAI) which is extensive white matter trauma over a widespread area. I also had broken facial bones, broken ribs, and a shattered wrist. The medical team inserted a brain shunt to relieve swelling and placed me in a medically-induced coma. My wife, Katie, remembers one doctor saying, "Bob could wake up and be the same person he was before, or he could remain like this (in a coma) indefinitely.” She recalls that, at this moment, the injury and the unknown became even more real and more scary.

After nearly two weeks in the coma, I woke up-- on Thanksgiving Day. I was very incoherent. For example, I didn't know what year it was and my friends later told me that I spoke differently, like a child. After another ten days in the intensive care unit (ICU), I was moved to the Rehabilitation Institute of Chicago (now Shirley Ryan Ability Lab), where I stayed for an additional two weeks. I was discharged after begging the doctors to let me spend Christmas at home, but with strict orders to attend outpatient brain rehab five days a week, eight hours each day.

I spent 6.5 months in brain rehab and still had a long road ahead. Adequate rest and working my brain early on was extremely important. I slept at least 12 hours each night with a 2-3 hour nap most afternoons. This was my new normal, or at least for that period in my life. My family respected my need for quiet and sleep, which was instrumental in my healing. I had headaches and couldn't handle much stimuli for the first 2 years of my recovery-- for example: television, most public places, crowds, or even traffic. I also couldn’t drive because my brain wasn't able to process all of the information coming in simultaneously. I became emotional and overacted at times toward my parents, and would find myself in tears afterward apologizing. Regardless of the confusion and difficulty, I never lost sight of making my recovery my number one priority. If people didn't understand, I had to let it go and continue to give myself what I needed-- proper rest and time to heal.

Over the next few years, I was still living with my parents but began to take additional steps in my recovery. I enrolled in a history class at a community college, I began to drive short distances, I went out a bit more in public, and I started exercising again. In 2016 I moved to Arizona with my then girlfriend (now wife), and began to build a new life for myself. I believe that TBI wasn't the end of my life, but a new beginning.

After moving to Arizona, my father and I started a real estate investment company and my wife and I established our nonprofit organization, Beanies On Brains, Inc. I am thankful and fortunate to be living a happy and healthy life and hope to inspire other brain injury survivors. We believe that a good life is possible after TBI. Though my injury was unexpected and shattered my world to pieces, I learned how to put those pieces back together. I know that the hard work I put into my recovery helped me rebuild a strong foundation, allowing me to function and live like I do today.

The Inspiration  Behind the Beanies

After my brain injury in 2010, I knew that I wanted to give back and help other brain injury survivors. The Rehabilitation Institute of Chicago (now Shirley Ryan Ability Lab) was always cold to me, so during my stay I often wore my favorite gray beanie. It helped keep me warm and, in a way, made me feel comfortable. The nurses and my doctors would smile and say, "There's Bob, wearing his beanie again!"

To me, putting on our beanie symbolizes strength and hope. It represents brain injury awareness and education. It's like a comforting armor and protection for our brain and reminds us of all of the tools needed to fight through recovery. Traumatic brain injury may change your entire body and challenge your mind, but it won't change your soul.